Whale watching is like a box of chocolates – you never know what you’re going to get. Or something like that, I haven’t seen that movie in a while. But it’s true! When we set sail from the Old Harbor in Reykjavík out into the feeding grounds of the largest bay in Iceland, we often have a pretty good idea of what awaits us out there, but we can never be sure. Which types of whales (or cetaceans) are there, and what they’re doing, can vary from day to day and even from hour to hour. When going whale watching, there are several notable whale behaviors to be on the lookout for! 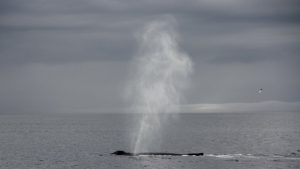 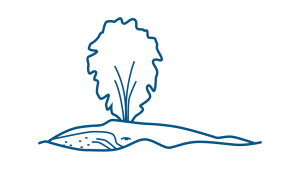 Thar, she blows! This is often the first sign of a whale that we get while searching. The blow of a whale appears from the distance as a puff of steam or geyser coming up from the water’s surface and is caused mainly by the condensation of water vapor from the whale’s lungs. In proper conditions, the blow of any cetacean species can be visible, even the tiny harbor porpoise.

The blows of different whale species vary in their shapes, which sometimes makes it possible to identify a species from far in the distance! For example, the blows of humpback whales, fin whales, and blue whales are quite tall and column-like, while minke whales’ blows are much lower and bushier. And then there are some whales with rather unusual blows – sperm whales’ blows come up at an angle, while right whales have V-shaped blows! 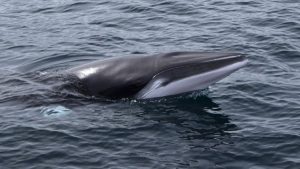 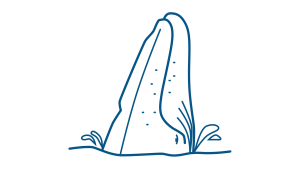 Why do whales spyhop?
After more than 50 million years of evolution, cetaceans are extremely well adapted to their lives underwater. But because they evolved from land mammals, this means their eyesight is still functional above water – and they can take advantage of that! Cetaceans sometimes lift their heads out of the water to get a look around, a behavior called spyhopping. This might be out of curiosity, especially if a whale-watching boat is around, or it might even be to look for something to eat, for example when orcas are hunting for seals resting on ice floes. Some whales are strong enough to keep their heads out of the water for several minutes at a time. It’s so amazing when a whale is as curious about us as we are about them!

Why do whales put their fluke up when going for a dive?
When it’s time for a baleen whale to take a deep dive, it will arch its back and point its head towards the seafloor for better leverage. Sometimes, however, a whale needs a little extra push to dive down, and so it will lift its tail (or fluke) out of the water as it goes down! The reason for this is likely related to the whale’s bulkiness – whales with thick blubber layers float very easily, and so they lift up their large and heavy flukes to weigh themselves down. The fluke of a humpback whale can stretch more than 5 meters across!

This common behavior of humpback whales is particularly useful to scientists who study them. Each humpback whale’s fluke has a unique pattern of black and white, which is a bit like our own fingerprints. By photographing the flukes, we can tell when that individual was spotted last, and by comparing photos between different areas we can also tell where else they’ve been spotted. Many of the same humpback whales return to Faxaflói Bay every year! Read more about this in our blog about Humpback whale Identification. 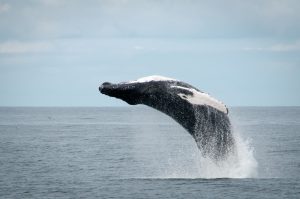 Why do whales breach or “jump”?
Experiencing a breaching whale is an incredible behavior well-known by whale watchers around the world. It doesn’t happen often, but when it does, it’s incredibly exciting to see one of these oceanic giants lifting their bodies out of the water and crashing down with a splash! But why do whales breach? Well, there is no simple answer as to why whales breach. In fact, there are likely several reasons, and whales can breach for different purposes each time. But here are several major theories:

Communication: When large whales breach, the impact produces sounds over a wide frequency range which can travel quite far. One study showed that humpback whales are more likely to breach are pods are separated by long distances, possibly because the wide frequencies aren’t drowned out by wind and wave noise, like vocalizations are. A breaching whale may be doing so in an attempt to attract mates or to signal to others that it is available.

Bathing: Cetaceans, especially large, slow-swimming species, may accumulate parasites such as barnacles or lice or even algae on their skin. The force of impact when these large animals breach is enough to send these unwelcome guests flying, so they may be keeping themselves clean by breaching!

Feeding: When cetaceans breach, they could be crashing down onto a school of fish or other prey to stun them and make them easier to catch and eat.

And then of course, whales may just be doing it to have fun! 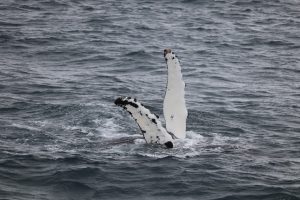 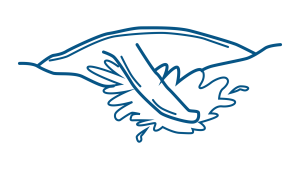 Pectoral slapping, also known as pec-slapping, is a behavior most commonly seen in humpback whales. The individual rolls onto its back or side, raises one of its flippers (or pectoral fins) out of the water, and slaps it down onto the surface. Humpback whales have the longest flippers of any whale, stretching up to 5 meters, or 1/3 of the whale’s total body length. So when humpbacks slap their fins, it can produce a loud sound and quite a splash!

The reasons for this pec-slapping behavior may be similar to breaching: to communicate, to rid themselves of parasites, or perhaps for having fun. During the mating season, female humpback whales have been known to pec-slap to indicate to males that she is available. 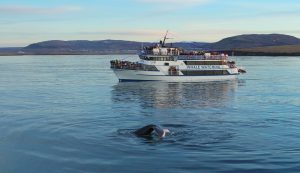 No matter which of these behaviors you see, sailing into Faxaflói Bay aboard our boats will provide an unforgettable wildlife adventure. We at Special Tours Wildlife Adventures offer whale watching tours every day of the year, with up to 10 departures in the summertime. For more information, or if you have further questions, then feel free to contact our ticket office at info@specialtours.is or call +354 560 8800.

Authorized by the Icelandic Tourist Board